The following notes were written by an EDC staffmember after a field visit in Chhattisgarh. 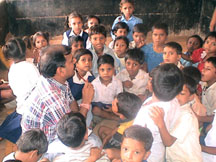 Students and their teacher participate in an IRI program.

From the very first day of the IRI programme here in Chhattisgarh there has been a positive response from teachers, students, audiences at large and people from the field. This response comes not only from the pilot areas where the project was launched, but also from the areas and schools we haven’t even targeted. One such school was randomly chosen for a visit by EDC on October 16, 2004.  As it turned out, the resource official of one of the clusters of Abhanpur block has taken the pains to run the IRI programme in his school with his personal funds.

As per information from the field, this cluster resource person bought a radio set and donated it to Dondhra Primary School, located some 20 kilometers in from Abhanpur block headquarters. He found inspiration after seeing that some of the schools of the area were selected for the IRI programme and received radio sets by EDC. When he learned that his primary school was not among the enlisted ones, he took a personal interest and donated a radio set to the school.

This school has a good number of children, totaling 102 in class One and Two, all of whom are taught by the only teacher (Mr.Samaylal Sahu) of the primary section. This teacher obtained a Xerox copy of the Teacher’s Workbook that was distributed to IRI Schools. When we passed by on the road, we heard the radio program broadcast.  Upon arrival, we learned that this school was never in the list of the IRI project schools selected by EDC, but they were very nicely and interestingly teaching the large number of children, who were joyfully following the instruction given by the radio lesson.

We also learned from the teacher that the Dondhra village committee provided money for the radio battery. The teacher was very happy that such a programme was being implemented in the area that would enhance the knowledge of children and thought this would certainly bring positive results.

(As seen and reported to Vijay Ratre from the field).

Similarly, we made a field visit to Raweli Girls Primary School, located some 25 kilometers from Abhanpur Block headquarters.  This school had been given electricity expressly for playing the radio in the school. This school was selected for the Formative Evaluation, and did not have electricity. Previously, the evaluators used batteries to play the IRI programs. Since the radio set was kept in the school, the teachers there decided to seek cooperation from the Village Panchayat officials.  After getting no positive response, one of the neighbors of the school came forth and assisted the IRI programme by providing an electricity connection.

(As seen and reported to Vijay Ratre from the field)

Launching into Action - IRI Programs On Air in India