"Broadcasting as Usual" in Haiti

Port-au-Prince, Haiti
After only a two-week delay during Haiti’s recent socio-political turmoil, EDC’s interactive radio instruction (IRI) program was broadcasting and conducting regular project activities. Following the president’s resignation on February 29th, broadcasts were suspended, reports EDC project director Nicole Racine. “But we were back to work four days before the recommended return date by USAID. In fact, the FAD (Formation à Distance) distance education programs were broadcast regularly on the radio so that students and teachers could hear the lessons from home.”

By March fifteenth, kids started to go back to school, and by the twenty-second of March all schools were back in session, says Racine. “The Ministry of Education has now revised the school schedule to continue until July to make up for the missed schooldays.”

"We had to...try to identify regions and schools most affected by the situation..."

EDC, in collaboration with USAID Haiti, the Academy for Educational Development and the Haitian Foundation for Private Education (FONHEP) runs the Haiti Distance Education Inside and Beyond the Classroom project. EDC has been working to improve education in Haiti since the early 1990s, starting with primary education in Creole and math for children in school. Now, in addition to primary school teachers and students, at-risk youth aged 6 to 11 and 12 to 18 are targeted. In addition to math and Creole these audiences learn about civic education, health and environmental issues through interactive radio programs broadcast five mornings a week by two commercial and two community radio stations. 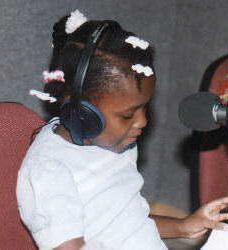 The project works with a number of sponsors such as Catholic Relief Services (CRS), Save the Children, and strong local PVOs (private voluntary organizations) who help to equip participating schools with the necessary materials. Such partnerships were critical for facilitating information sharing during and after the political crisis, says Racine. “We had to get in touch with our sponsors in the field to try and identify regions and schools most affected by the situation and come up with a new schedule for the broadcast.”

They found that following the President's resignation school attendance varied greatly by region. In the north, schools were closed from the beginning of March, while in the central l'Artibonite area, schools have been closed since the beginning of the school year and remained so. In part of the western region, schools have been closed since November. In one case a school was burned to the ground—but surrounding communities came together to help. “This school is now able to hold classes as two nearby schools have taken the students in and are sharing their facilities in the afternoon until the school can be rebuilt,” says Racine.

Overall, she says, it is clear that even in times of political instability, distance learning is helping Haitians improve their access to education and information. “Despite governments which come and go, despite financial problems, despite degrading situations, distance education has survived it all.”

Education over the Airways
New Directions for Interactive Radio Instruction in Haiti: dot-EDU