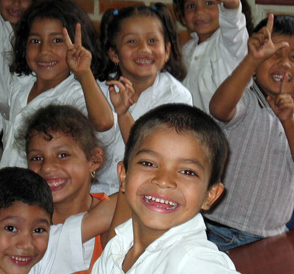 Pre-schoolers from La Mesa city in class after listening to an IRI Program (photo by J. Miranda)

By 2015 and in accordance with Education for All (EFA), the Government of Honduras seeks to have 50% of its pre-school age population in school.  Currently, less than a third of preschool age children are able to attend pre-primary institutions, most of which were private.

Yet, the idea of pre-school education in Honduras is not new.  In 1998, the Ministry of Education and the Education Development Center had begun to develop a project plan based on the premise that early childhood education not only promotes cognitive development, but also leads to children staying in school longer.  However, these plans were literally swept away by Hurricane Mitch in late October of that year.  The Ministry of Education (MoE) building in the capital, Tegulcigalpa, was flooded to the third floor and essentially destroyed, as were years of research and documentation about education in Honduras.  As the frames for the new MoE offices were built in the wake of one of the worst natural disasters to hit Central America, thoughts returned again to pre-school education.  The Honduran government’s commitment to early childhood education over the past six years has led to the dot-EDU Interactive Radio Instruction (IRI) Based Pre-School Program.  dot-EDU is a cooperative agreement  funded by USAID that seeks to strengthen education and learning systems through the use of information and communication technologies (ICTs).  The 18 month project is implemented by EDC in collaboration with the Fundación Para La Educación Ricardo Ernesto Maduro Andreu (FEREMA), the Ministry of Education and communities in the regions of La Paz, Comayagua and Francisco Morazán.

"Community educators continue to teach even during national teacher's strikes"

In a country with no formal pre-primary program, skilled caregivers and teachers are rare.  In addition, few physical spaces exist, and communities were largely unaware of the possibility or

impact of pre-school education on their children.  Starting from scratch and hoping to achieve the government’s 50% enrollment target required considerable forethought and research.  An initial, comprehensive assessment conducted by EDC and FEREMA found that a multichannel, participatory strategy was necessary to make pre-school education functional and sustainable in Honduras.  This strategy has translated into the development of a multichannel education package that includes audio programs in CD format, didactic materials like posters, worksheets and teacher’s guides, as well as student-centered teaching methods to reinforce learning modules.  It has also facilitated the participation of the community—parents, community members and local government representatives provide not only their input, but also the structural and monetary means to enable the programs to take place.  Community members have donated their backyards, rooms in local schools and village halls in order to make sure pre-schoolers have a place to learn.  In turn, the local government supports the community educators with stipends. "What makes this program unique is that it is not completely dependent on the organizations involved.  Parent and community involvement will provide sustainability even after the project end date ” explains Yvette Sanchez, EDC Project Director, “this will help the country to achieve its goals of education for all."

Over the past year, the project has made substantial progress:

“The programs are so popular” says Cecilia Crespo, Senior Technical Advisor “community educators continue to teach even during national teacher’s strikes!”  The IRI program’s dual audience approach, which engages students while also giving cues and instructions to the educator, has been very successful.  “One teacher told me she felt empowered by the radio programs,” explained Cecilia.  This is significant, considering the majority of the educators have had no prior teaching experience.  Dependence on the IRI programs to the exclusion of other learning activities was an early concern.  “Our worst fear was that the educator would do nothing on non-program days,” said Cecilia, “But after our first training on IRI, we followed up with a second that taught them student-centered activities they (the educators) could use without the IRI programs.”  She continued, “What is interesting is that in a way, these educators are blessed with no formal training—they take more risks and demonstrate more creativity than educators who have been teaching for decades.”