This pilot project is designed to gauge the success of applying a versatile video compact disc (VCD) technology to meet critical learning needs of young girls who cross the Mekong in search of a more exciting and financially rewarding life in Thailand. 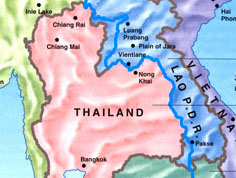 Map of Thailand and Laos, on either side of the Mekong River.

"The illusion of a better life in Bangkok may begin with market trips to the capital followed by short stays with relatives and perhaps making brooms that will be sold across the river."

Media Portrayals and Harsh Realities
Young girls all around the Mekong region are drawn to cross over into Thailand by media images of safe, healthy and well-dressed youth with ample money in their pockets, enjoying a comfortable and exciting life. When the young girls first cross the Mekong, they do not envision sacrificing their health or safety but instead hope to achieve the same financial and social gains they see Thai youth enjoying in the media. What they don’t see is the high percentage of illegal migrants who are unable to survive on the few baht (local currency) they take home from work. These people are often exploited by unscrupulous employers, denied health services, and have little opportunity to further their education. This reality creeps up slowly, little by little, somewhere between home in a village in Laos and life on the street in Bangkok.

The illusion of a better life in Bangkok may begin with visiting relatives and perhaps making brooms to be sold across the river. The next step may involve day passes to cross the river in hopes of selling the brooms at the big Saturday market. Some girls then choose to stay on the Thai side to work in a kiosk or assist a vendor. They enjoy the opportunity to socialize with Thai youth as well as friends from Laos. However, once the girls have been lured across the river, other offers begin to come along, such as work in a larger town a bit further inland. The further inland the girls move, the more alienated they become and the less familiar they and their families are with potential employers. As a result, their risk of sexual exploitation, exposure to HIV/AIDS and drug abuse, and falling victim to forced labor is greatly increased. The beguiling truth is that their security subtly lessens and the fated steps toward an unacceptable level of risk are often too difficult to identify. 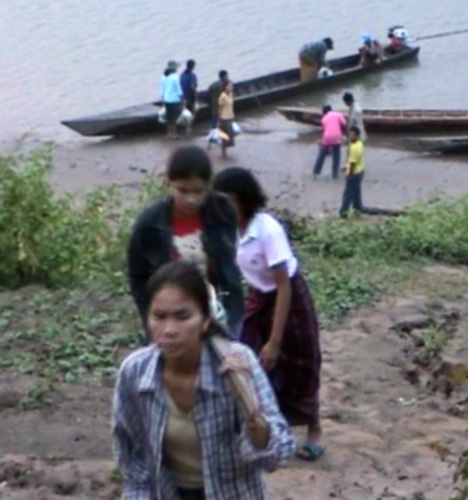 Contemplating a New life on the Thai side of the river.

VCD Modules Promote Learning and Reflection for Migrant Girls
In an effort to reach these girls before they find themselves in compromising situations, this pilot seeks to demonstrate how VCD technology--already very popular in the region-- can be harnessed to meet critical learning needs among young girls crossing the Mekong River into Thailand, as well as other groups of at-risk youth. Instructional design fully exploits the VCD technology, distributing and reinforcing the learning through music, dialogue, sequences of images, and subtitles. Due to the variety of spoken languages in the region, the multiple sound tracks available are used strategically to offer more than one language choice for both users and peer facilitators. Communicative power is strengthened by maximizing the functional load of the visual and oral media and limiting the role of print to simple and key phrases.

The two model VCDs in development each contain 6 short modules and make use of the medium’s reputation as a mode of entertainment as it opens with well-known music from local artists. Each 8 minute module contains a mini-drama or interview, a narrated news byte, and a telling sequence of images that ends in an open-ended trigger question to stimulate reflection and discussion. Content is organized to help migrant girls reflect on the trade-offs between options and, as a result, to help them make more informed choices. The full set of modules on a given VCD is displayed via a menu of images on an opening screen, giving peer group facilitators, or girls privately viewing the VCD, the option of following their interests and selecting topics as often and in whatever sequence they desire.

To deliver “edu-tainment” style content, learners will use a balanced combination of visual and print symbol, to access information in areas of particular interest including 1) the various kinds of immigration status and the differences between them, 2) how to get out from under oppressive employers, 3) what kind of alternative health services are available under the various kinds of legal and illegal immigrant status’, and 4) what kinds of genuine employment options are available to immigrant girls who are being taken advantage of by unscrupulous employers.

To make this pilot activity a success, EDC has partnered with two national NGOs (non-governmental organizations) to produce these VCDs. The Pattanarak Foundation has experience in working with girls at risk on the Thai side of the Mekong, while another partner, PADETC, is experienced in working with girls at risk on the Lao side of the border. Both partners are part of a network of groups and agencies involved in supporting at-risk girls who cross the Mekong. This puts the NGOs in a good position to test their combined effectiveness to produce the VCDs and reach the girls already involved in their programs. Looking beyond the pilot phases of the activity, the low cost of hardware, software, and production processes make adaptation of this technology in context and scale an attractive option for all involved.

The broader objective of this activity is to demonstrate the communicative power and versatility of this technology for meeting a range of learning needs, particularly among the teenagers and youth who are so attracted to the VCD for its entertainment value. Yet VCD technology can just as easily be harnessed to support classroom learning, particularly since the multiple sound tracks can be dedicated to training the teacher or facilitator or to provide them with guidance at difficult points in the process.