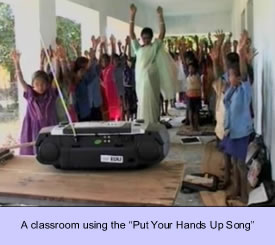 The Indian state government of Chhattisgarh has expanded an EDC-developed interactive radio instruction initiative (IRI) to reach approximately one million children. The program is part of a two-state radio initiative that involves 7 million children in more than 80,000 schools.

The large-scale broadcasts of “English is Fun” follow successful pilot tests in two states, Chhattisgarh and Karnataka, earlier this year.

The program expansion is supported by the state department of education and accompanied by teacher training and community outreach activities. “The positive expansion of the IRI programs in these two states could not have happened if the state governments had not shown such interest and offered so much co-operation,” said Vandita Sharma, who directs the work as part of EDC’s Technology Tools for Teaching and Training (T4) program. “It would not be wrong to say that the support we received from them is unprecedented.”

The T4 program works to produce and deliver quality education, notably for girls and other vulnerable populations. The work is supported by the United States Agency for International Development (USAID) and implemented with numerous NGO and government partners.

The Chhattisgarh program builds upon the existing state English curriculum, which emphasizes listening and speaking skills. Students practice skills when they sing songs, play local games, or conduct chain exercises during the 30-minute broadcasts. For example, the “Put Your Hands Up Song” integrates language and movement, by encouraging the children to sing and raise and lower their hands in conjunction with the words in the song.

“These programs are the first of their kind in most of our states. Both the teachers and the children are fully involved in the activities.”
- Vandita Sharma, Chief of Party

In addition to regularly scheduled student programs, an additional series offers program support for teachers. These “Teachers Only” programs use feedback gathered from the field about how the IRI methods are affecting the teaching and learning environment. This feedback is used to generate tips for teachers on facilitating programs and overcoming other challenges that arise. A teachers' guide has been developed and printed by EDC for schools in both states. The training was done jointly by the government and the EDC.

“These programs are the first of their kind in most of our states,” said Sharma. “Although the Karnataka government has been successfully running an audio program for the last five years for primary schools, the technique of the IRI programs has a totally different appeal and value. Both the teachers and the children are fully involved in the activities. We have sufficient feedback to be able to affirm that a difference is being made even in teaching practices in non-IRI time as a result of this initiative.”

Listen to audio programs or view videos by clicking on "samples" on the India T4 website.

Multiple Learning Channels to Attain Education for All

Technology Tools for Teaching and Training in India Fact Sheet

Technology Tools for Teaching and Training in India Brochure (PDF)