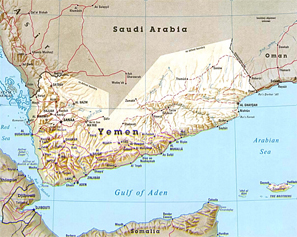 Yemen is one of the least developed countries in the Arab world, a society where literacy rates for girls and women run as low as 30%, while poverty rates are correspondingly high. In a bold pilot project that began in September 2004 Yemeni high schools are being wired to the Internet for the first time. Through support from USAID, EDC and its partners iEARN and World Links are training teachers to use the new technology as well as conduct research on the impact of the initiative, notably on the experience of girls.

“With so many local schools in need of basics like qualified teachers, books, and desks, some people have asked why we have opted to focus on computers,” says EDC project assistant Amel Osman. “The country is very poor,” says Osman, “but does that mean the young people there should have no access to computers? We feel it’s important to make a start in exposing them to information and communication technologies.” Staff also see the project as an opportunity to connect Yemeni students and educators to colleagues in the rest of the region and around the world. “By wiring these schools we hope to create an online learning network among the students and teachers in Yemen, and ultimately across the region and the United States,” says Osman.

In the first phase of the project, organizers selected 10 schools in 2 urban areas --5 in the capitol city Sanaa and 5 in the second largest city, Aden. A further 8 schools will be selected in 2 rural areas for the second phase. As the hardware is installed, staff at EDC’s International Education Systems division (IES) will train teachers in the use of student-centered instructional techniques; iEARN and World Links will pick up on that training and work with teachers to use the Internet effectively as an instructional tool in their classrooms. “Many of these teachers have never used computers before, so our training will go from the basics—this is a monitor, this is a mouse—right up to sophisticated techniques for conducting online research,” says Osman. “Our objective is to teach teachers to use the Internet skillfully as an instructional tool.” Teachers are encouraged to use the computers alongside their students so that usage is monitored.

"Our objective is to teach teachers to use the Internet effectively as an instructional tool."

The computers aren’t the only new feature in these schools—the EDC trainers are also introducing Yemeni teachers to new teaching methods, such as small group learning and interactive, hands-on approaches. Staff are particularly enthusiastic about the advent of “student-centered” teaching, a significant development in a culture where schooling is traditional, top-down, and teacher-centered. “Using the Internet is more glamorous than just going in there with a typical teacher training on student-centered methods,” says EDC project director Helen Boyle. “It creates more interest and enthusiasm among the staff and the students because there is great curiosity about other parts of the world. It opens up a whole new world for them—especially for the girls.”

Upon return from Yemen, Boyle notes “the staff are excited and eager to learn. They see this project as a great opportunity for themselves and their students.” The teachers also expressed a good deal of apprehension about exposing their young people to the Internet. “One of the first things they ask is, ‘How do we screen out the bad things?’” says Boyle. “In their minds there is an immediate association of the Internet with problematic information and images. We remind them that the project encourages teachers to use the computers right along with the kids, so student usage will be monitored. We also reassure them that the Internet is a great resource for them and their students, with the benefits far outweighing the risks.”

Girls are a special focus of the project. Yemen has very low enrollment of girls in upper school grades—by middle school most have dropped out. Of those girls who do make it to high school, many are already married and have overcome great obstacles to be able to attend. “High schools in Yemen are segregated by gender, so two thirds of the schools we chose for the project are girls schools, “ says Boyle. “We have a particular interest in ensuring that girls get experience working on the Internet.” EDC staff are also collaborating with SOUL, a woman-owned and operated NGO in Yemen, to conduct research on the barriers girls and women face in accessing the Internet. They will collect data based on classroom observations and teacher and student interviews at the selected schools.

EDC is also collaborating with World Links to develop a baseline evaluation and an end-of-project measurement to assess the overall impact of the Internet on teaching and learning in the selected schools. Staff hope to determine what changes have taken place in these classrooms as a result of the computers. The research team will be looking at such indicators as features of the computer the teachers return to, Web sites they visit, the kinds of assignments they develop, and student products that result from the work. They will also compare standardized test results from the pilot schools with other schools across the country to see if the new technology has had a measurable impact on student achievement. Those reports will be available through the IES Web site when they are complete.